“I simply cannot thank him adequately; How do you thank a man that has given you your life back?” 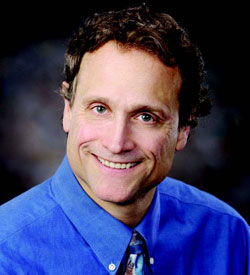 I never thought this whole ordeal with my back pain could happen to me. I am a physician and I live a healthy life, but I wasn’t so healthy five years ago. So I actively made lifestyle changes and lost 85 pounds through exercise and diet. I exercised properly and never took risks with my activities or health in general. I felt that finally I was the captain of my ship, and I really thought spinal problems were not in my future; after all, I was doing everything right.

However, one Friday afternoon in September 2012, while doing yard work at my home in North Dakota, I bent over to lift a heavy sprayer and was suddenly gripped by excruciating pain. It coursed through my lower back and legs, and I dropped to the ground. I had never before experienced pain so intense that it dropped me to my knees and made me feel like passing out. I contacted my physician who told me that I likely ruptured a disc, and I should rest over the weekend, take pain medications, and see if I improve by Monday. I was given Aleve, oral steroids, a muscle relaxant, and a strong narcotic. I tried ice packs and heating pads. None of these helped at all. Even though my lower back pain was significant, I was amazed to find that the muscles in my leg hurt far worse. The muscles in the front of my right thigh and on the side of my right calf ached beyond belief.

Fortunately, Monday morning finally arrived, and my visit to the MRI center confirmed the diagnosis of a severely bulged disc. Over the next two weeks I had three steroid injections. These shots are administered right into the exit point of the affected spinal nerves and are painful to the point of requiring sedation. The good news was that they were truly helpful and finally gave me good temporary relief. Slowly, I returned to work, and about three months after the disc bulged, I was back exercising in full force. I felt that I had conquered my injured disc.

But all it took was a forceful move in a Zumba class three months later and I was on the floor again. However, this time it would take more than conservative treatment to return to “normal.” I was eventually able to partially return to work, but life was empty. The things that had given me the most joy in everyday life, normal interactions with family, exercise, and working pain-free were taken away from me; this was in spite of numerous spinal injections and all kinds of physical therapy. I spent three months dealing with this. When I failed to improve and my right thigh lost considerable strength, a repeat MRI showed a new development; a broken piece of disc had migrated upwards away from the normal disc space and was lodged vertically between the body of a spinal vertebral bone and the ligaments and muscle surrounding it. 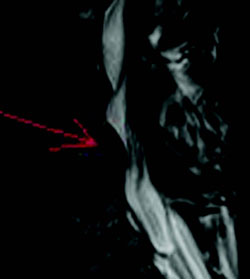 I consulted two notable local spine surgeons, one of whom felt he could try microsurgery and remove the bulged disc, but he didn’t have any plan for the portion that had broken off and lodged vertically next to my vertebra. My other orthopedic spine surgeon, who was a friend and colleague, told me his opinion. The bulged portion of the disc might easily be removed but the vertically lodged component was a significant challenge. He didn’t know if he could remove it without making a much larger incision into my back, and as a result I might end up with fusion surgery. Having two fused vertebrae is sometimes the only option to solve numerous back issues, however, it limits the mobility of your back. My colleague told me that he happened to know a physician in Arizona, Dr. Anthony Yeung, who would be best qualified to help me.

I didn’t hesitate. I immediately contacted Dr. Yeung’s office and within a week, I heard back from the Desert Institute for Spine Care (DISC) in Phoenix. His staff was warm, welcoming, and confident. He was patient and understanding, and he reassured me that he felt that even though there were risks, there was a 90% chance he could help me with a microsurgery. I signed on immediately, and 24 hours later I was undergoing the procedure that would give my life back to me. Amazingly, I was awake during the entire process, and thanks to a superb anesthesiologist, I experienced no pain whatsoever during the procedure.

Dr. Anthony Yeung explained that Joseph’s particular situation required his specific skill set as an endoscopic spine surgeon. “Dr. Ebertz’s MRI indicated a herniated disc that migrated upward with an extraforaminal component. Surgical consensus included fusion recommendation due to a need for a facetectomy to address the extraforaminal herniation as well as the migrated fragment. But Joseph is so active that the referring physician hesitated to offer the fusion procedure to him. So instead, I performed a transforaminal decompression at L4/L5 and extracted the migrated fragment under endoscopic control. That is why it is crucial to evaluate the patient’s condition as well as the individual’s lifestyle to perform the appropriate operation and fi nd best surgeon for the procedure.” 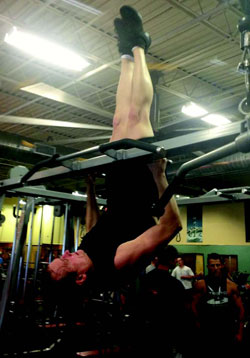 The first night after my surgery, I expected to experience some pain and was given a prescription for narcotic pain pills, but I didn’t even need one pill! My post-op visit went very well and I was given the O.K. to fly home the next day—only two days after surgery. I took two and a half weeks off work to allow healing without interruption, but subsequently my return to work was uneventful, and I was able to work as if I had never had a spinal problem. I returned to a regular course of exercise, and within eight weeks of surgery I was at 90% of my pre-surgical exercise routine and had recovered 80–90% of the strength that I had lost in my right quadriceps muscles. I’m 58 years old and I can do Zumba class as well as any 20 year olds on the floor!

Exercise has been a critical part of my life for years now. It kept my weight down and my confidence up. For nearly six months I had lost that part of my life. If I had not met Dr. Yeung and not had this surgery, my quality of life would have been permanently diminished. Everyday activities and work would have continued to be adversely affected.

Dr. Yeung has the confidence of decades of experience and he has scientifically proven that spine surgery is effective and life-changing. Some people have scoffed at the idea of me flying from North Dakota to Phoenix for this surgery. I have no second thoughts. I simply cannot thank him adequately; how do you thank a man that has given you your life back? The only thing I can do is to offer my story as testament that spinal surgery is not experimental, but effective. I am living, walking proof!