DISC was proud to again support Larry Fitzgerald, Jr. with his annual Fitz’s Supper Club Celebrities at Your Service dinner that took place Monday, August 25, 2014. The Arizona Cardinal’s star wide receiver makes a difference on the field and in the community. Fitzgerald and his teammates wore aprons and served tables at Dominick’s Steakhouse in Scottsdale to raise money for his charities to help fight breast cancer and to provide programs for inner city youth, via the First Down Fund. Last year $250,000 was raised and he hopes to top that this year. We congratulate you, Larry, on your impact on and off the field! 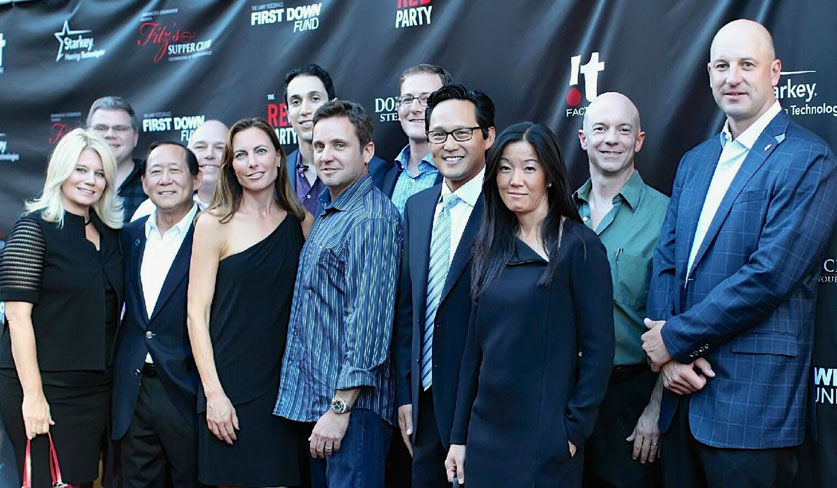 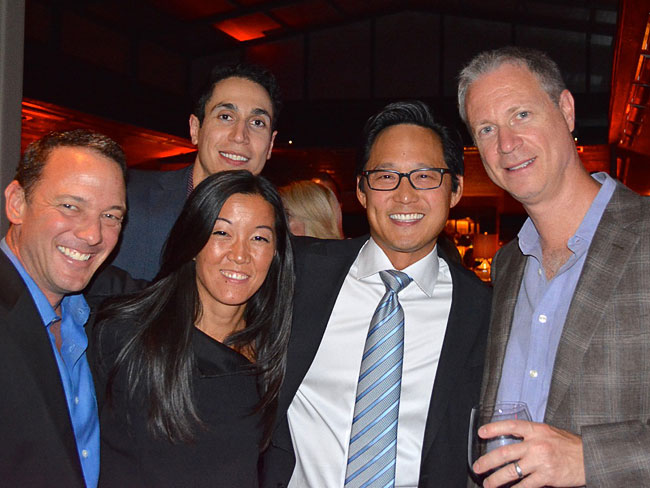 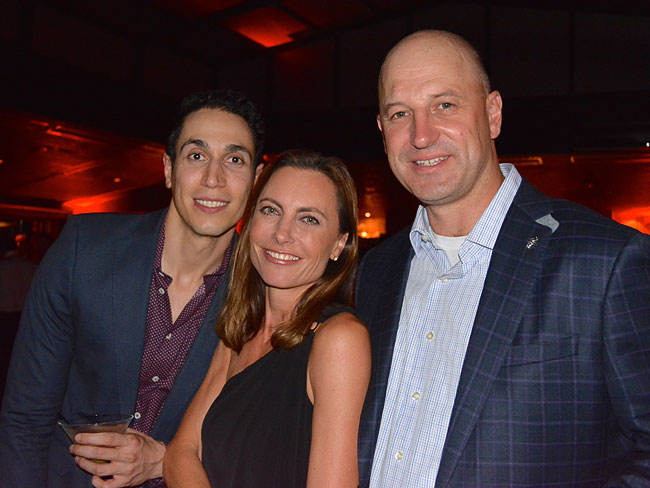 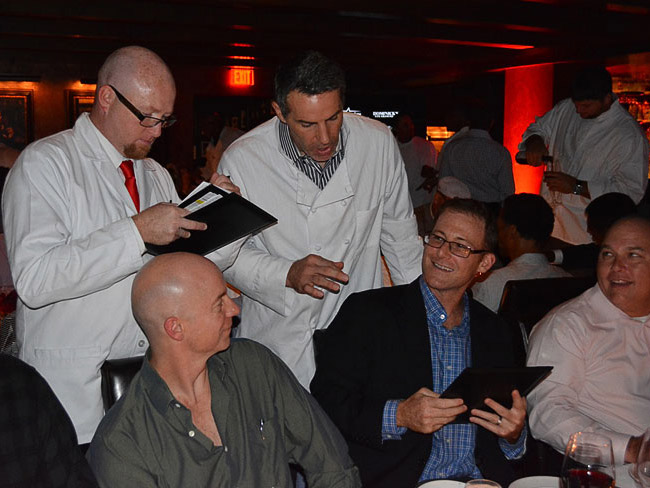 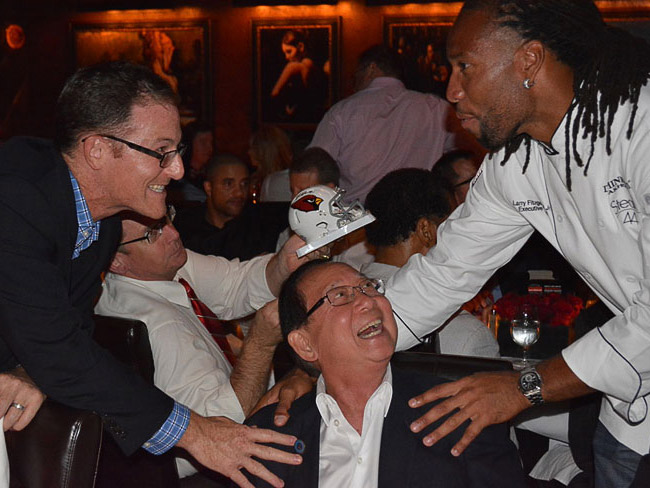 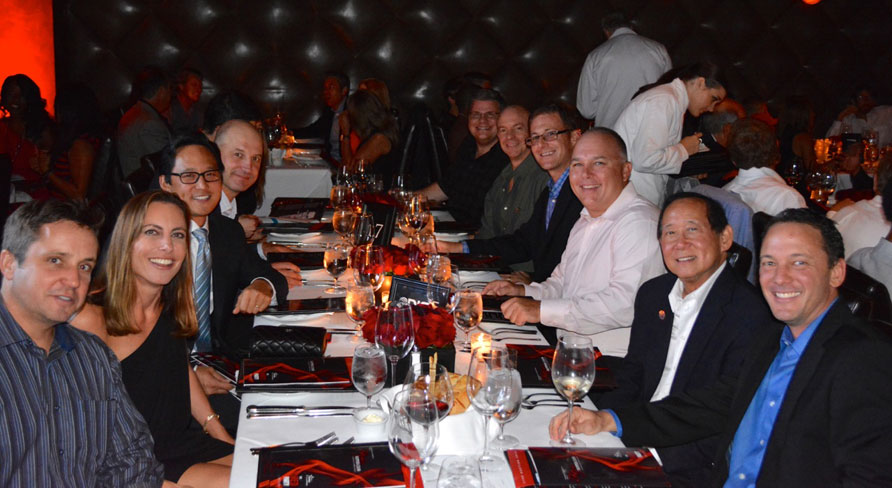 We chatted with Fitzgerald about his love of food and cooking, and his passion for dining around the Valley.

Question: Who plans the menu for the Supper Club dinner? Do you have input?

Answer: Actually, the menu that we go on is exactly what I like to eat when I go up to Dominick’s, so I order up the crispy shrimp, steamed vegetables, steaks, pretty much what I order up there; they kind of tailor-made it for me, I guess. If you’ve never been there before… . People are going to love it.

Q: Do you have your server menu all locked down? Anyone tying on an apron for the first time?

A: A few of our teammates that have never been there will be servers. It’s a pretty easy concept, but it’s mostly guys that are on my team who have participated in the event, so they know what to serve and what to do, and the do’s and don’ts. But it’s fun, we get to be around and interact with all of our fans and supporters.

Q: Will you be whipping up anything in the kitchen, or strictly serving tables?

A: No, I want people to actually enjoy the food (laughs). No, I’m not going to mess with that. I don’t want anybody to be upset with the food, so I’m going to let the great staff at Dominick’s handle all of that.

Q: A few years back, you were working with cooking instructor Linda Hopkins. Are you still taking cooking lessons or have you graduated?

A: I graduated already. I graduated with flying colors, and she’d tell you the same thing. Those were some great times, you know, taking culinary lessons from Linda. We worked together for almost three years. That was a lot of fun. I really enjoy … I’m a bit of a foodie, I really like to go to restaurants and things, even though I have a personal chef that pretty much prepares all my meals at the house now. But I still steal recipes all the time from people.

Q: Is cooking something you wanted to learn as a practical skill or do you enjoy it just as a pastime?

A: I think a little bit of both. It was a practical skill that I needed. I was a 21-year-old single male, and I didn’t want to be eating out every day, so I wanted to learn how to cook, and cook well for myself. I was able to do that over three years working with her, and I can still cook. But convenience-wise, it’s just easier for me just to come home, and the food’s on the table.

Q: Obviously, nutrition must play a big role in your lifestyle. Do you follow a particular plan or diet?

A: I need to stay on a really strict schedule with my weight. I have to be at a certain weight to be able to be successful at my job, so I try to stay right around 218, 216 (pounds); that’s the weight I try to maintain. So in terms of what I eat, you know, I eat all healthy. Pretty much I love all types of fish, I pretty much stick with that. I love vegetables. I don’t eat too much carbs, but I love salads though. I’ll usually have a salad, except for breakfast.

Q: Is it hard to be a foodie when you have to so strictly maintain your training regimen? Do you ever just indulge and take down a plate of brownies in one sitting?

A: No, I really don’t. I have some sweets now and then, but I wouldn’t say I have a major sweet tooth. I mean, I’m not going to sit here and lie to you, and say I don’t eat that at all. Every once in a while, I’ll sneak something. But you gotta think, I burn probably 5,000 calories a day at practice in this heat.

Q: What are your favorite places to dine in Phoenix?

A: I go to a lot of places for sushi. I love Sakana, up there on Indian Bend and Hayden. When I want to indulge, I go to Lolo’s Chicken and Waffles in Scottsdale, on Scottsdale Road and Thomas. I go to the Breakfast Club for breakfast. Butterfield’s for breakfast is really good. Also, I really enjoy all the Mastro’s locations, Steak 44 and Eddie’s House on Indian School.

Q: The Super Bowl is in town this year, so lots of out-of-towners are coming in. What would be the one place you would recommend as the quintessential Valley spot?

A: That would all depend on what kind of dining experience they wanted. Are we talking fine dining? Are we talking … what type of cuisine do they want? They’d have to break it down to me a little bit more specifically than just, “Give me a restaurant.” Because I go to so many places. Like, if I want Mediterranean food, I go to Tasty Kabob over there on Apache, right by ASU’s campus. I’ve traveled all the way around the world, I’ve been to over 95 countries, so I love ethnic food, different types of cuisine. So you’d have to be more specific than just “Give me a restaurant.” I could give you 30 restaurants.

Q: Last year, the Supper Club raised more than $250,000 for the First Down Fund. Do you have a goal in mind for this year?

A: I would love to be able to do $250,000 again. I want to raise money for the cause, causes around the country, around the Valley. I also want people to come out there and have a wonderful time while they raise money. I don’t want it to be one of these stuffy events where, you know, “Oh, here’s another charity.” I want people to have a wonderful time, an experience that they remember, tell friends about, so they can bring somebody new the following year.

Q: Why do you love doing this event, keeping it going in its sixth year?

A: The staff and the organization have been outstanding. And every single year it’s been sold out. The thing that I really like is a lot of repeat business. I would say 60 percent, 65 percent of the people just continue to have a good time and keep coming back. That’s really special to be able to have that intimate time with everybody. I really like the concept behind it because I get to know the people. They get to know the cause, they get to see the people that are being directly affected by the money they raise. That’s the part that makes it special for me, it’s that interaction that we’re able to have. I think it’s priceless for me.

Q: What gave you the idea for this event six years ago?

A: I was approached about the concept. At first I was hesitant because I had never witnessed it, so I didn’t really know how it was going to be run and operated. Once I had figured out kind of how it was going to be done, I was a lot more willing to participate. Then the first year, it was like, ah, I was so moved by the turnout; I was so moved by the amount of money that we raised for a first-year event. I was so excited that I was able to partake in it and be allowed to do it.

Q: Anything new this year?

Q: Are there items up for bid you’re particularly excited about?

A: We have a little bit of everything, from golf experiences to vacation-destination holiday experiences, sports memorabilia, game tickets to different sporting events around the country, so we try to make it diverse… .

Q: Any reason for the switch to Dominick’s this year?

A: Morton’s wanted to continue to do it, but they’re actually going through a renovation there, they’re renovating the restaurant for the whole month of August, and they just could not facilitate an event of this magnitude during the renovations.